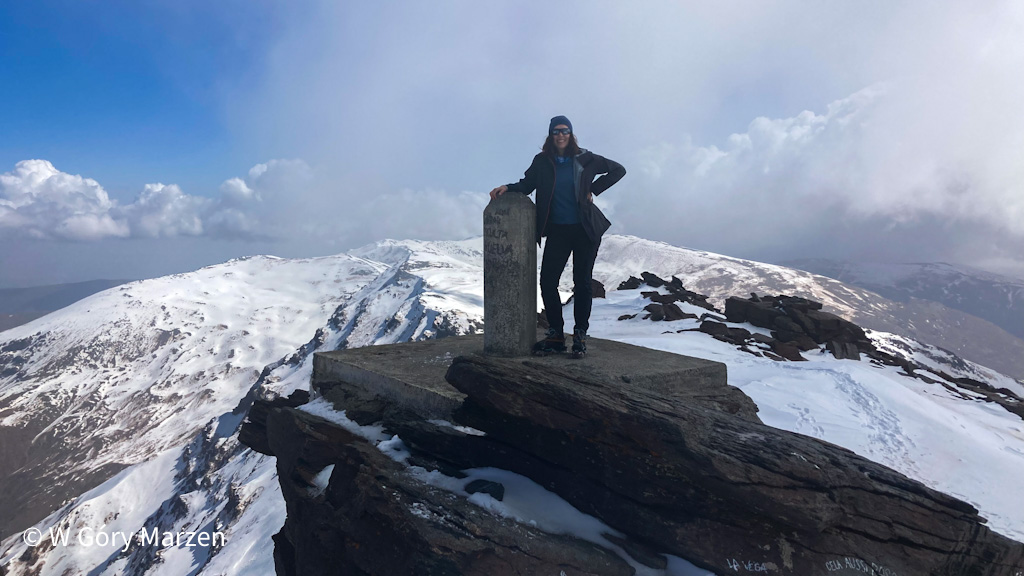 Mulhacén is 3,482 meters above sea level and is located in Sierra Nevada, near Granada. It is the second highest peak in Spain, right after Teide, which is located in the Canary Islands (you can read about climbing Teide in this post). Mulhacén is also the highest peak of the Iberian Peninsula.

Mulhacén – Getting there and practical information

I started my journey by coming to Granada from Madrid. The journey takes approximately 5.5-6 hours. Then, from Granada, I took a bus to the town of Capileira. The Alsa bus takes around 2.5 hours, costs around 7-8 euros and departs from the Granada bus station. As I left Granada at 12, I was in Capileira around 2.30 pm. There is a tourist information point (SIAC) and a drinking water spring at the stop. There will be no more water points on the way to the refuge.

At the SIAC point, we can ask about the route and buses that run in summer. However, I was on a lunch break and asked for details on the phone.

It’s best to plan your ascent to Mulhacén at the end of spring or summer. In spring we will find snow in the mountains and you should have the appropriate experience and equipment for winter hiking in the mountains. In summer, there is no snow on the trail, but we have to deal with the heat and scorching sun. There are no trees on the route and no shade at all. Take plenty of water and sunscreen with you 🙂

From Capileira I follow the “por estación electrica” trail, ie through the hydroelectric power plant. At the beginning, the route is quite wide, slowly increasing in height, all the way to the power plant. Right in front of it, there is an abandoned town where the power plant used to live.

Behind the power plant, the route starts to get steeper and narrow. Partly it runs through meadows, partly through overgrown bushes, I cross streams several times (only the really strong ones have small bridges). After about 5 kilometers, there are 5 more and about 800 meters to go up.

The trail goes up without any major surprises. For the last few hundred meters I am beginning to feel tired. The sun hid behind the soft glow of the clouds. I arrive at the Poqueira Hut around 6:30 pm, after 4 hours of hiking.

The total distance on the first day was 10.46 km, and the sum of the altitudes was 1190 m.
Refugio Poqueira is situated at an altitude of 2500m above sea level.

Accommodation in a hostel must be booked in advance. This is best done by phone. The shelter number can be found on this page of the shelter. By the way, you can also order dinner and breakfast (there is no field kitchen in the hostel). The website also provides up-to-date information on the conditions at the summit and a description of the various trekking routes from the shelter.

At the beginning of May, the shelter was full. There were even two dinner turns. There is also a vegetarian option to choose from :). You should have your own sleeping bag when you stay overnight in a hostel. During my stay, the water heating broke down, so the only possible shower was in ice water.

On the day of reaching the summit, I woke up around 6:30. I had breakfast at the hut and at around 7:30 am I set off on the trail.

There are two main routes to the summit of Mulhacén: from the east and west. I am going to go up and down by a different route, so I choose the one from the west side for the entrance. It is steeper, but theoretically shorter.

At the beginning of May, there was no more snow around the shelter, but after about half an hour its first patches begin. The route begins its ascent along the Río Mulhacén River. From around 2,800 meters, the trail is completely covered with snow. This part of the route in the morning is unlit by the sun, so it is well-frosted. At first, you don’t need crampons, but after reaching about 3000m, I take them out of the backpack and put them on my shoes. The route is getting really steep. There is only one narrow path in the snow, which tells me that this route is not chosen very often. At this time on the trail, I only meet two climbers who intend to climb to the top from the steep north side.

I slowly go up, keeping an eye on the trail marked by the GPS. When I am almost at the top, I start to notice other tourists who have also chosen this variant of the route. However, they are several hundred meters away from me.

After about 3 hours of hiking, I come out onto a ridge where two routes (west and east) meet. The sun starts to heat up and only 2 minutes to the peak. There is already a group of tourists at the top, and more can be seen in the distance. From the top there is a beautiful view of the surrounding peaks.

After a dozen or so minutes at the top, resting and eating energy bars, I choose a gentle descent towards Alto de Chorrillo. This is a route to the east, so the sun, warming from the morning, slowly melts the snow.

When I was descending, at some point, following the GPS, I unnecessarily turned left, thinking that I would get to the shelter faster. Unfortunately, I got to the point where the trail broke and I had to turn back, thus making up an additional 3 kilometers of the way. The best way to descend is to the Alto de Chorrilo point. From there, we can either turn towards the Refugio de Poqueiro refuge, or continue towards the car park (Hoya de Portillo).

As I borrowed crampons from the shelter, I am going in this direction. I get to the shelter around 2:30 pm and I plan to go down the same route I used to enter Capileira, from where the bus to Granada departs. However, it took me over an hour to get lost on the route. I only have 4 hours to get to Capileira as the last bus leaves at 6.30pm.

I’m starting to look for other solutions. Just at the same time as me, two girls returned to the shelter, I decide to ask them if they are in the car and if they are going back towards Capileira. It turns out that they do, and they even go to Granada. They take place in the car, and I am grateful for taking them.

We go to the parking lot near the Hoya de Portillo point. At the beginning, the route leads sharply down towards Capileira (about 500m), and then 8 kilometers along a flat, narrow path along the brook. From this trail, we have a picturesque view of the snow-capped peaks of the Sierra Nevada all the time.

We reach the car park around 5:30 pm. After a short rest, we set off towards Granada. We stop for dinner in Pampaneira. At this time, in one restaurant, we can get a pizza or a sandwich, choose a pizza and after the meal we go to Granada.

I liked the mountains and trekking in Sierra Nevada very much. Climbing Mulhacén is a nice 2-day trek (you can do it in 1 day, but it’s best to sleep in a nearby town). Trekking, despite the considerable height, is technically not difficult. I recommend 🙂 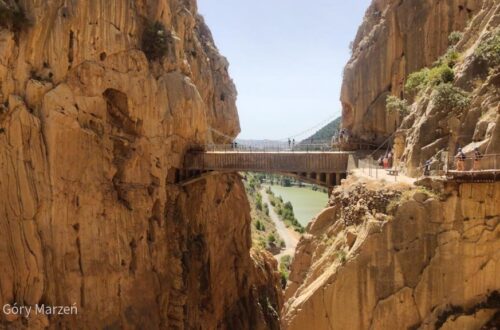