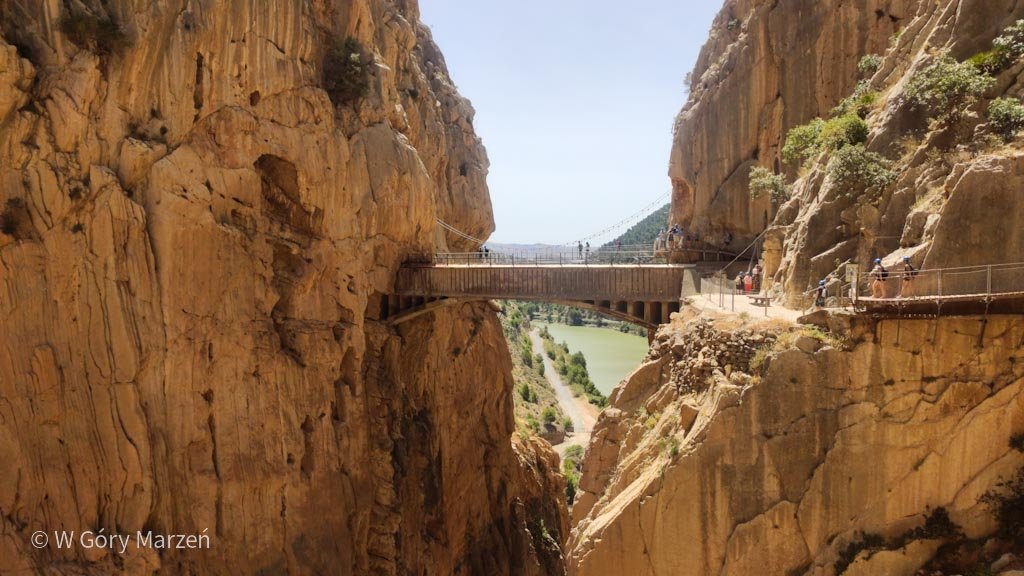 Caminito del Rey is a very spectacular path in Andalusia, in southern Spain. Caminito del Rey is 7.7 kilometers long and takes about 2 hours to complete. The trail begins in the town of Ardales and ends in Álora, at the El Chorro Dam. On the route you pass between two walls, canyons and a large valley, partly on trails and partly on footbridges.

I went on the trail on a weekend in June with my friends from work. Caminito was the highlight of our trip and we stopped in the pretty town of Ronda.

The history of the Caminito del Rey trail

Caminito del Rey dates back to 1901-1905, when the Sociedad Hidroeléctrica del Chorro company built a footbridge path on the canyon walls, connecting the town of El Chorro with a hydroelectric plant on the Guadalhorce River. The path was very narrow and it was mainly used by power plant workers. The construction of a water reservoir began on the river. Workers living at the power plant started to be visited by families and friends who began to admire the beauty of nature in the canyon. More and more people prompted engineers to design a more comfortable and improved path.

The Caminito del Rey trail, literally means the king’s path. The name comes from the King of Spain, Alfonso XIII, who in 1921 inaugurated the opening of the water reservoir and completely covered the trail, from then on called Caminito del Rey.

Over time, accidents began to occur on the trail, to such an extent that it became known as “one of the most dangerous in the world. In 2000 it was decided to close the route and completely renovate it. In 2015, Caminito del Rey was reopened, this time with solid footbridges, safe for visitors, and the old path that runs just below the new, wooden one.

The Caminito del Rey is located in the south of Spain, near the town of El Chorro. We can reach the trail by car or by public transportation.

We can also get to the Caminito del Rey trail by train. The most convenient way to get to the El Chorro – Caminito del Rey (Álora) train station is from Malaga (about 40 minutes) or from Seville (about 2h 15 minutes). Tickets can be purchased from RENFE on this page. We can take a shuttle bus from the train station to the beginning of the trail. Buses run every 30 minutes between 08:30 and 16:30.

The route of the Caminito del Rey is one-way, so arriving by car and parking at the entrance to the trail (north entrance), we will have to return to the parking lot by bus. Another option is to return on foot along the narrow street. Traveling by train, we don’t have to worry about returning, as the trail ends at the train station in El Churro.

The best to purchase entrance tickets to the Caminito del Rey in advance (especially if you want to go there on a summer weekend). This can be done on the Caminito website here. There are two types of tickets available: free admission (€10) or with a guide (€18). I bought the tickets about a month before the trip and during the summer period only guided trail crossing tickets were available.

Even if you buy a guided entrance (there are Spanish and English entrances for the same hour), on the trail you can separate from the group and go at your own pace.

If you make reservations in advance and intend to go in the summer, it is a good idea to choose a relatively early hour to avoid the scorching sun and heat :).

The beginning of the route – access to the entrance gates.

The longer route begins with the entrance to the tunnel, just past the “El Kiosko” restaurant. Initially, you emerge onto a wide trail running through a Spanish pine forest. The trail is flat and easy, running along the river valley. After about 30 minutes we come to the gates where tickets are checked. There are also toilets at the entrance, another only at the exit.

Important information: gates, check tickets for a specific hour, pick up helmets we need to pass before the official entrance. So be sure to leave early enough so that you are already at the gates for the purchased hour.

At the gates we join our guide and the group. There are about 30-40 people in total. The first point is the now-defunct hydropower plant and dam on the river – Presa de Gaitanejo. In the past, there were also cottages of power plant workers, where they lived with their families. The Caminito del Rey, in fact, is the trail that the workers and their families used to travel even on a daily basis.

We move towards the first canyon. The path begins to get narrow, and part of the trail follows footbridges mounted on rock walls. The guide mentions to us the history of the trail, including, among other things, how in the 20th century climbers climbed the walls here and spent the night in tents in the canyon. We set off admiring the views. At the end of the canyon there is a small tunnel.

We exit the first canyon and immediately have a view of the railroad tracks running on the other side. We move on to the second canyon, which is no longer as narrow as the previous one, and pass the first bridge, which does not encourage us to cross to the other side. Fortunately, this time we won’t be crossing to the other side of the river. We move on and separate from the group to travel the rest of the way on our own.

The route here follows a wide path and overlooks a beautiful valley. Along the way we have several information points about the local flora and fauna, as well as places to rest. The trail is also partially shaded here.

Third canyon and bridge on the Caminito del Rey

Near the end of the trail we hit the most spectacular part of the route. The surrounding walls start to become flat and steep. We ascend the footbridges, which are 100 meters above the river valley. Under the new path we can see the old path. The view is impressive, especially when you think about the lack of barriers or protection.

We can admire the beautiful rock formations and enjoy the space. At the end of the canyon we come to another bridge, which this time we have to cross. Just past the old bridge, visible from the trail, is a new 15-meter steel bridge running over the precipice, which swings slightly under the load. From the bridge we have a view of the canyon on one side and the Embalse Tajo de Encantada lagoon on the other.

Exit from the Caminito

After crossing the bridge, the last part of the trail on footbridges awaits us, followed by a nearly 2-kilometer stretch to the exit. Along the way we have views of steep rock walls. At the end of the trail we have several information points about the history of the Caminito and the nearby town of El Chorro. There is also a railroad bridge right at the exit.

At the exit of the trail there is a place to put away helmets, restrooms, as well as refreshments and souvenir stores. Here, too, in the town of El Chorro, we can return to the parking lot by bus (2.5 euros) or return to the larger town by train.

Not far from the entrance to the trail is the Mirador de Tres Embalses viewpoint, from which we have a view of three bodies of water. A nice option when we have a car at our disposal 🙂

Subjective assessment of the trail

Caminito del Rey is a nice option if you want to go to an easily accessible but spectacular place. I was very positively impressed by the last part of the route. Other than that, the trail is quite short and very touristy. It’s more of a tourist attraction than a trek in my opinion. But if we’re in the area, it doesn’t hurt to take a walk and reflect on the days when the route on previous footbridges was traveled daily.

If you found this post useful and feel like supporting my efforts, you can buy me a coffee by clicking on the link below. Thank you! 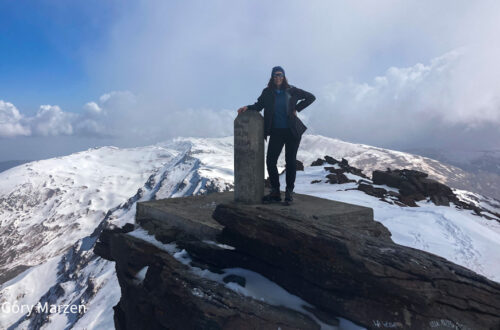